“Il Molo = One woman + two soulmates + the Italian seacoast + crime” – I thank Writers’ Lens for coming up with this equation of Il Molo as the title of an interview I gave on the website (See post) . This is the final element of the equation of Il Molo.

The scene of the crime… next to the bastion on the the Punta Crena. 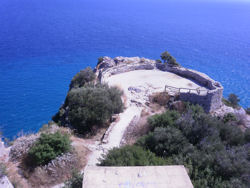 Although I love a well written book in almost any genre, the exception being science fiction, crime and thrillers remain my favorite. From John Grisham to Nicci French to Stieg Laarsen to Lee Child, the more crime and suspense the better – but not too much blood please.

In Il Molo, there is no blood, but there is a crime. A body on the beach of the spiaggetta. Who is it and why? In the dream version the mystery is never solved. This leaves Martha uneasy about the scenes she witnessed in her subconscious, especially when the dreams seem to become reality. In the real world, a crime of passion, one could say. A perceived sense of wrong, a too proud ego, a man who unjustly blames another.

Why here? The possibility of a crime in this relatively peaceful vacation spot is what inspired Il Molo.

In July 2010, I was sitting on Varigotti’s beach engrossed in another crime novel. An Italian friend (who inspired one of the characters in Il Molo) came to join me on the beach. Noticing that I was reading another thriller, he asked me if I could write one. My reply was “why not?” I immediately thought of the little beach, the spiaggetta, under the Punta Crena and imagined a murder, or a suicide, a body found on the beach, a police investigation.  The spiaggetta, sinister and unwelcoming to me, was the perfect spot for crime. I could very well imagine someone falling from the cliff above. I added an inept investigation by the local police in the dream version and a surprise motive in the real version.

There are still some surprises but I can’t reveal everything. I hope these four posts have inspired you to read the book.