TN: This week’s interview is with Elizabeth Noyes, author of the “Imperfect Series.” Her fifth and final book of the series will launch on August 21st. Take advantage of the one-day introductory sale price of 99¢.

TN: Welcome Elizabeth. Why do you write, and what subjects or genre inspire you?

EN: I’ve always been a writer. In high school I wrote skits for the cheerleaders, a play

for our acting club, and even won a local short story contest. Every job I’ve ever held always ended up with a writing requirement, likely because it’s my strength. Even in conversation it becomes apparent that writing is my passion.

I’ve also always been an avid reader, though it’s less about the genre than the quality of the writing. Give me a good plot, characters that come to life and I’m hooked.

TN: What genre do you normally write in?

EN: My natural inclination leans toward action/adventure/suspense with a dash of romance thrown in for good measure. I like excitement and emotional upheaval, but I also like when the good guys win.

EN: I prefer third-person point of view and try to mix up the various styles. Too much of any one loses the rhythm.

TN: What is your biggest challenge when novel writing? And do you ever get writer’s block?

EN: Distractions are my biggest challenge. I tend to immerse myself deep into the story and when the inevitable distraction occurs, I find it difficult to re-establish the connection. That’s why I’m prone to early morning writing—while the world is still sleeps!

TN: How many books have you written, and what inspired you to write your first book?

EN: I have written five books, four published and one due to release August 21, 2018, and co-authored two others.

I started writing after one of my favorite authors let me down. He did a really poor job of finishing up a novel that had a marvelous buildup. I couldn’t help but think he was up against a deadline and took the easy way out. I’ve never bought another of his books. Disgusted, I thought to myself, “I can do better than that.” And so it began.

TN: Why did you decide to self-publish instead of going through an agent or publisher?

EN: I published through a small press, which is not quite indie, but not quite a traditional method either.

TN: How did you come up with your cover design?

EN: I stumbled across a picture, one of an eagle with a damaged wing still flying high. My editor and I collaborated on the design with me insisting on using the eagle.

TN: What software do you use for your print version and/or for eBook?

EN: I use Microsoft Word and Excel for writing. My small press publisher formats for both print and eBook versions.

TN: What tips would you give to someone who is considering self-publishing the work?

EN: There are lots of indie collaboration groups out there. Join them. Follow the threads. Identify those most knowledgeable and ask for advice. Pose questions to the group. In other words, educate yourself on all aspects of the process. There is a learning curve and you will make mistakes. Forgive yourself, learn from your errors, and move on.

TN: Describe the plot of one of your books.

EN: The five books I’ve published under my name alone is actually a series. The story revolves around a ranching family in Idaho—the mother, father, and their five grown children. In the first book, a young woman stumbles onto a drug operation and murder in Honduras, and in so doing bungles a special ops mission underway. The leader of the special ops team has a decision to make: continue the mission or rescue the woman. Of course, he rescues her … and falls for her in the process. The ensuing story is series of adventures that take them on wild chase across the states with him protecting her until she can testify. It’s one of those edge-of-your-seat types of stories. As I like to say, not your ordinary romantic suspense! 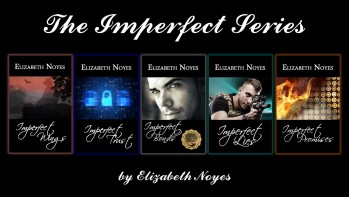 TN: If you’ve written more than one book, which one is your favorite?

EN: The subsequent books in this series revolve around each of the siblings. The underlying threat is that same characters continue throughout so they become like family to the reader. More of their personalities are revealed as you progress. If I had to choose a favorite, it would be the first one I described above, Imperfect Wings, because 1) it was my first published book, 2) it took me longer to write/edit/polish and then release, and 3) it has garnered the most reviews simply by being the first.

TN: Do you have any future projects/novel ideas in mind?

EN: I have my first ever manuscript waiting in the wings. I call it my ‘practice’ manuscript because in it I did everything a new author could possibly do wrong! I still love the plot idea, so the outline is pretty much there. It will require a complete rewrite though.

TN: Thank you Elizabeth for sharing with my readers. Here are the links to her books, available on Amazon:

And you can learn more about Elizabeth on …

I’m trying another marketing channel. My books are now posted on Readers Review Room (RRR), a site for readers and authors. Mission statement: “To become the ultimate resource to help readers find their next great book, and to provide unparalleled support and exposure for indie authors.”

Take a look at the RRR site. You might find some great books. You can also become a reviewer.  Readers Review Room.

Kate Johnson has made it to mid-level management in the IT group of a pharmaceutical company. Her intelligence, technical competence and easy-going personality are among the keys to her success. When Kate watches a television interview of one of her ex-boyfriends, her demons of over 30 years ago are awakened. Over the coming weeks, she cannot shake the resurrected feelings of betrayal and injustice, and vows to confront the men she once loved. She methodically conceives and carries out her ingenious, and illegal, plan. As the two men, her family and friends seek to understand her actions, Kate accepts her punishment.

Kate Johnson has made it to mid-level management in the IT group of a pharmaceutical company. Her intelligence, technical competence and easy-going personality are among the keys to her success. When Kate watches a television interview of one of her ex-boyfriends, her demons of over 30 years ago are awakened. Over the coming weeks, she cannot shake the resurrected feelings of betrayal and injustice, and vows to confront the men she once loved. She methodically conceives and carries out her ingenious, and illegal, plan. As the two men, her family and friends seek to understand her actions, Kate accepts her punishment.

The Cruelty of Love is listed under the Contemporary category. Take a moment and vote!

If you’ve read A Woman’s Weakness by Molly Gambiza you can also vote for her book, also listed under Contemporary. And if you haven’t read it, I highly recommend you do so.

crueltyoflove, promotions, The Cruelty of Love

Max is Kate’s longtime colleague/friend and an important element of the story. Including Max came naturally, and the development of his character evolved as the story headed toward its climax. It was only when I finished writing did I realize that his character serves a dual purpose.

First, Max provides a current love interest for Kate, the protagonist, boosting her lovability in spite of her actions. Max is one of Kate’s colleagues, and he is in love with her. He vowed never to reveal this to Kate. They’ve been colleagues for years and never once before the events of the novel did Kate ever suspect Max’s feeling.

Second, Max provides the reader with an anchor in so-called sensible behavior should the protagonist’s behavior seem over the top. Max’s questions about Kate’s out-of-character behavior may mirror their own thoughts. Why is Kate asking about guns and hunting lodges, when she’s shown no previous interest in either? Why does she leave work a couple of days a week earlier than usual? Why has she suddenly taken a vacation without informing him?

Max’s character may be a means to affirm that no one would go to such extreme measures to confront their ex-boy or girlfriends. In spite of his moral support, Max certainly wouldn’t. He confronts Kate with what he thinks he knows in an attempt to make her come to her senses, and is genuinely shocked, as most of us would be.

crueltyoflove, promotions, The Cruelty of Love

Thank you to the 975 people who signed up for the Goodreads Giveaway.

To the 4 lucky winners – your books are on their way.